Following his early days of struggle, Mutty Lall Seal launched his mercantile career by supplying the military officers stationed at Fort William. He was able to procure a position as a Custom’s Inspector [darogah] at Ballykhal. He was one of the early speculators in the first Indigo market in Calcutta which was established under the name of Messrs Moore , Hickey and Company.  In 1820, he was appointed as the banian of Mr. Smithson, an enterprising merchant and founder of the Strand Flour Mill. Seal would buy the mill after the departure of his former employer. 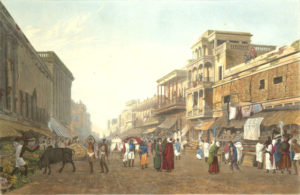 Following his success with Smithson, Seal was appointed as the banian in the leading first-class agency houses in Calcutta, such as – Leach & Kettlewell, Livingstone, Syers & Co.,  McLeod, Fagan & Co.,  Chapman & Co, Ralli Movrojani and Kelsall & Co (see Mitter 1869). He formed with a partnership with some other firms namely – Fergusson Brothers & Co, Oswald Seal & Co. and Tulloh & Co.  Oswald, Seal & Co. was partly owned by his son, Heeralal Seal. He also acted as the banian of many prosperous Indian merchants who used to import large quantities of cargoes at the post and he earned  substantial commissions from the profitable trade in indigo, sugar, rice, salt-petre, silk and even opium. He also imported iron and cotton. In 1835, Mutty Lall Seal played an active part in the trade between India and China, where the English East India Company had higher stakes, until its dissolution. He established  markets in the rural areas – Chappra (in present-day Bihar) for Saltpetre, Ghazipur for Sugar and Rampur Beauleah for Silk (the latter are in present-day Uttar Pradesh) . He established trusted agencies in the mofussils to ensure a smooth supply of raw materials. According to his biographer Kissorychand Mitter, Seal would launch forth ‘into speculations exporting to and importing from Europe goods to a very large extent. These specs were generally successful and at times the returns exceeded his most sanguine expectations’ (Mitter 1869: 16). George Johnson recounts a doggerel popular among the ‘sporting baboos’ who would aim to emulate Seal’s speculating prowess but on the racing track:

Sugar is rising,
Silk is likewising,
So now let us baboos the joys of sport feel;
I’ll not at ledger look,
But take my betting-book,
Like Radamadub and Muttyloll Seal.’ (Johnson 1843)

As a banian, Seal was famed for being able to judge the quality of the goods he traded in very accurately – Mitter, citing what must be public testimony, describes how Motilal Seal won a bet with a European merchant and judged the quality of a consignment of indigo blindfold (Mitter 1869: 11, Laha 1940:5). In 1844, he also exposed the firm Potter & Co.’s irregular trade dealings to the Calcutta merchant community (See Indian Mail 1844). To safeguard his fortunes against the unreliability of the market and the bank-failures, he also invested heavily in real-estate, including the bustling market at Dhurumtollah that he bought from Dr Jackson and properties all over Calcutta as well as other landholdings such as the zamindari of Raghunathpur and the estates of Mundalghat (in the Burdwan district) and Mahisadal (Mitter 1869: 18); ; a recent British Library Endangered Archives Project (EAP) survey claims that he also bought zamindaris in Jessore (currently Bangladesh), Bagnan and Kolaghat. Seal also mentored rising Bengali merchants such Ramgopal ‘Robert’ Ghosh who founded the successful Kelsall, Ghosh & Co. 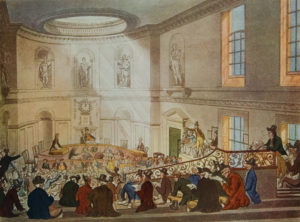 India House, London: The Sale Room, 1808 (with an auction going on), an etching with watercolor by Thomas Rowlandson

He was one of the pioneering Bengali merchants who saw the advantage of using steamships especially for internal trade in India. He made excellent use of the cargo boats which were a new sensation during the time and he introduced the steam tug boats. One of the first steam tugs in India was called Banian and was owned by him. John Phipps, in A Collection of Papers Relative to Ship-Building in India, records that the Banian was ‘built on private speculation, as a river accommodation vessel near Calcutta, having the engines of the late Firefly‘ (Phipps 1840: 205). The Firefly was built in the Kidderpore docks (owned by James Kyd) as a passage vessel. Seal owned about a dozen other ships, one of which was named  Rajranee, after his eldest daughter. Seal was a member of the New Bengal Steam Fund Committee, where he owned fifty shares and was elected a member, on the recommendation of J. Stocqueler, after the demise of Baboo Muthoornauth Mullick. (see Barber 1839: Appendix 17). He is said to have presided on meetings of the committee.  Seal’s pioneering efforts in promoting steam navigation should be kept in mind alongwith other contemporary endeavours such as Dwarkanath Tagore’s Steam Tug Association.

Seal survived the first banking crash in Calcutta that bankrupted many of the European agency-houses (such as Alexander & Co., Palmer & Co. and Mackintosh & Co.) and banks (such as the Bank of Calcutta, Bank of Hindusthan and the Commercial Bank) in the 1830s [for more information, see K.N. Chaudhuri, The Economic Development of India Under the East India Company 1814-58]. In 1836, the sugar produced in India was exported to England and Seal took advantage of the situation. He travelled to Patna and Ghazipur by boat, purchased twelve lakhs worth of sugar and returned to Calcutta. He earned a profit of 2-3 rupees at the rate of per kilograms when he had sold. He also encouraged his friend Krishna Mohan Mullick, the secretary of the Seal’s Free College, to write a three-volume historical record of the trade in Bengal. Mitter records that Seal also bailed out European firms when they were struggling to remain afloat: ‘While he was connected in that capacity with Messrs. Tulloh & Co., the great auctioneers of those days [… he] was perfectly aware of the tottering condition of the firm, but, situated as he war, he felt it his duty to continue supplying it with funds’ (Mitter 1869:13). Eventually Tulloh & Co. became Tulloh, Seal & Co. and was dissolved in 1854 (Allen 1854: 642).

He was one of the founder members of the Assam Company Limited which started the tea industry in India. He subsequently became one of the directors and was also a promoter of the Bengal Tea Association together with Dwarkanath Tagore, Prosonnocoomar Tagore, Rustomji Cowasji and Hadji Isfahani (See Rungta 1970: 20). He encouraged the Oriental Life Insurance Company, initially founded by and for European merchants and later renamed as New Oriental insurance Company in 1834, to underwrite insurance for the benefits of the Indians (See Rungta 1970: 13). Seal prospered in competition with  European merchants and made his fortune through entrepreneurship, astute speculations, real-estate and money-lending. Together with the merchants Syers, Ford, Bracken and Fergusson, Seal set up the new Bank of India in 1938 ‘on a general opinion that the banking facilities of Calcutta might be increased with advantage both to the capitalists and those engaged in commercial and trading persuits [sic] and the resources of the country more fully developed by the introduction of British capital’ (Asiatic Journal 1938).

The failure of the exchange houses and banks the second time round in 1847-8, saw the virtual end of Bengali enterprise and together with Carr, Tagore & Co. and others, Mutty Lall Seal’s agency partners, Oswald Seal & Co. (where his eldest son Heeralal Seal was a partner) suffered massive losses and he had to pay another hefty amount to cover the losses of Livingston, Dearman & Co. where his other son Pannalal Seal had investments. Mutty Lall Seal allegedly lost half a crore in the crash that brought down the other business houses but although he ended his business ventures shortly afterwards, he nevertheless left behind a colossal fortune.