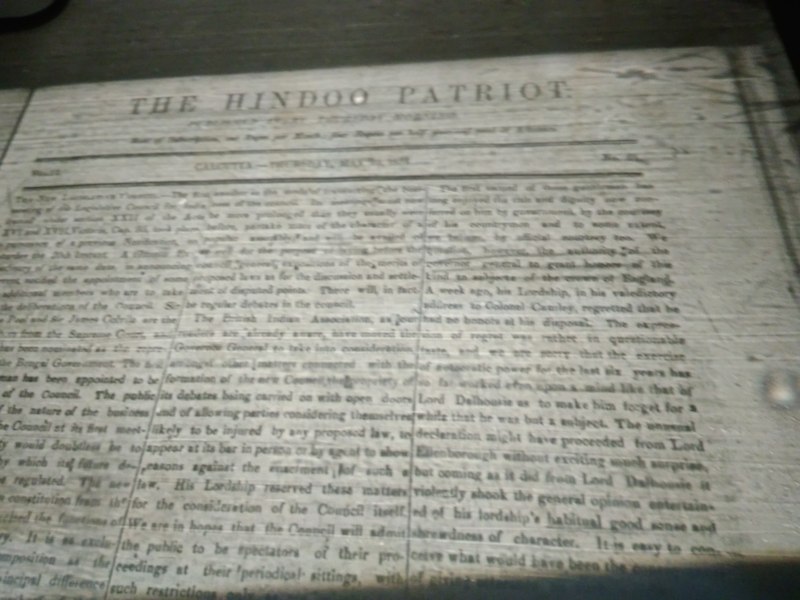 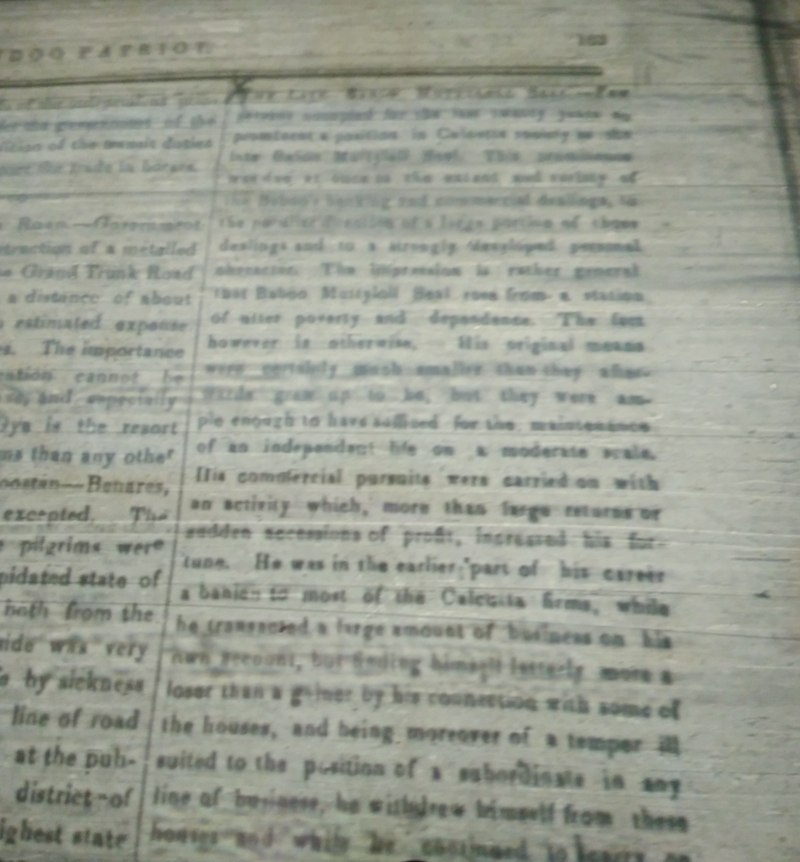 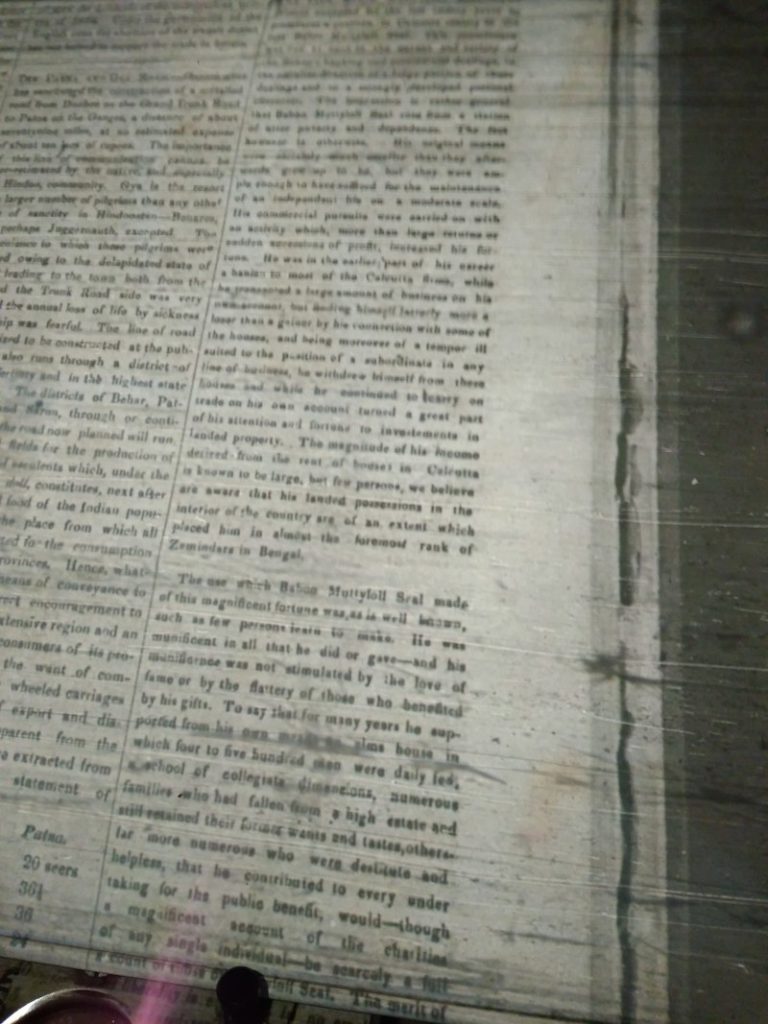 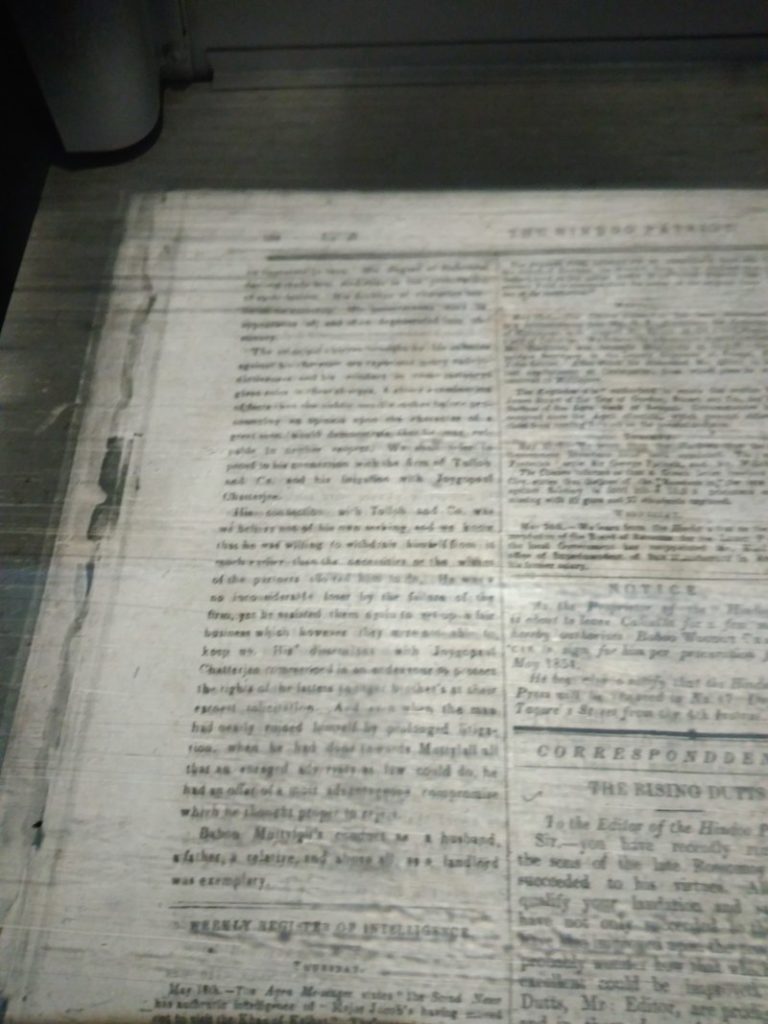 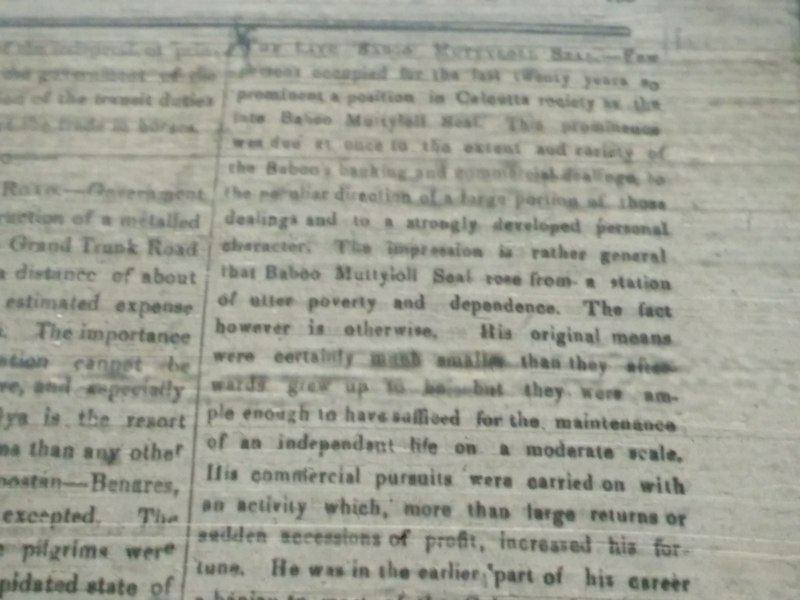 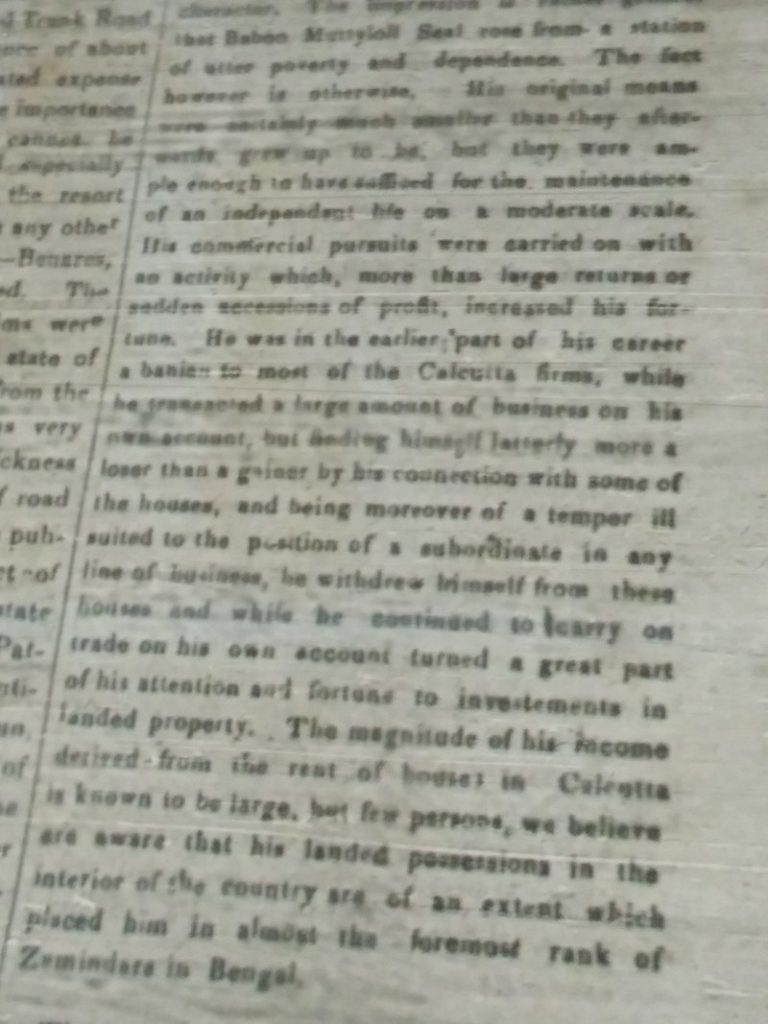 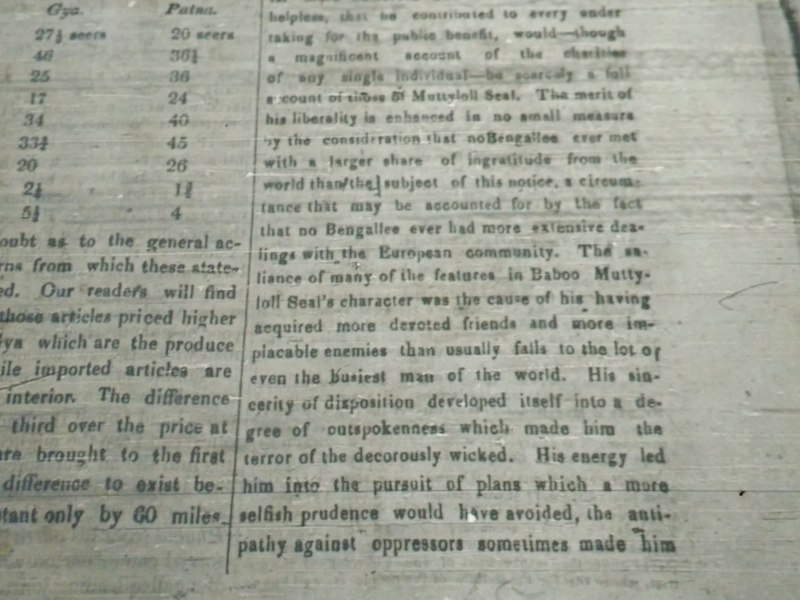 The above images are from a microfilm of the newspaper and the poor quality of the resolution is regretted.

Transcription of Motilal Seal’s obituary in the  The Hindoo Patriot

Few persons occupied for the last twenty years so prominent a position in Calcutta society as the late Baboo Muttyloll Seal. This prominence was due at once to the extent and variety of the Baboo’s banking and commercial dealings, to the peculiar direction of a large portion of these dealings and to a strongly developed personal character. The impression is rather general that the Baboo Muttyloll Seal rose from a station […] wards grew up to be, but they were ample enough to have sufficed for the maintenance of an independent life on a moderate scale. His commercial pursuits were carried on with an activity which. more than large returns or sudden accessions of profit. increased his fortune. He was in the earlier part of his career a banian to most of the Calcutta firms, while he transacted a large amount of business on his own account, but finding himself latterly more a loser than a gainer by his connection with some of the houses, and being moreover of a temper ill suited to the position of a subordinate in any line of business, he withdrew himself from these houses and while he continued to carry on trade on his own account turned a great part of his attention and fortune to investments in landed property. The magnitude of his income derived from the rent of house in Calcutta is known to be large, but few persons, we believe are aware that his landed possessions in the interior of the country are to an extent which placed him in almost the foremost rank Zemindars in Bengal.

The use which Baboo Muttyloll Seal made of this magnificent fortune was, as is well-known, such as few persons learn to make. He was, munificent in all that he did or gave— and his munificence was not stimulated by the love of fame or by the flattery of those who benefited by his gifts. To say that for many years he supported from his own means an alms house in which four to five hundred men were daily fed, a school of collegiate dimensions, numerous families who had fallen from a high estate and still retained their former wants and tastes, others far more numerous who were destitute and helpless, that he contributed to every undertaking for the public benefit, would though a magnificent account of the charities of any single individual— be scarcely a full account of those of Muttyloll Seal. The merit of his liberality is enhanced in no small measure by the consideration that no Bengallee ever met with a larger share of ingratitude from the world than the subject of this notice, a circumstance that may be accounted for by the fact that no Bengallee ever had more extensive dealings with the European community. The saliance of many of the features in Baboo Muttyloll Seal’s character was the cause of his having acquired more devoted friends and more implacable enemies than usually falls to the lot of even the busiest man of the world. His sincerity of disposition developed itself into a degree of outspokenness which made him the terror of the decorously wicked. His energy led him into the pursuit of plans which a more selfish prudence would have avoided, the antipathy against oppressors sometimes made him an oppressor in turn. His disgust at dishonest dealing made him vindictive in the prosecution of such dealers. His decision of character bordered on rashness. His perseverance were the appearance of and often degenerated into obstinacy.

The principal charges brought by his enemies against his character are rapacious usury and vindictiveness and his conduct in some instances gives color out of these charges. A closer examination of facts than the public usually makes before pronouncing an opinion upon the character of a great man would demonstrate that he was culpable in neither respect. We shall refer in proof to his connection with the firm of Tulloh and Co. and his litigation with Joygopaul Chatterjee.

His connection with Tulloh and Co. was we believe not of his own seeking and we know that he was willing to withdraw himself from it much earlier than the necessities or the wishes of the partners allowed him to do. He was a no inconsiderable loser by the failure of the firm, yet he assisted them again to set up a fair business which however they were not able to keep up. His dissensions with Joygopaul Chatterjee commenced in an endeavour to protect the rights of the latter’s younger brother at their earnest solicitation. And even when the man nearly ruined himself by prolonged litigation, when he had done towards Muttyloll all that an enraged adversary at law could do, he had an offer of a most advantageous compromise which he thought proper to reject.

Baboo Muttyloll’s conduct as a husband, a father, a relative and above all, as a landlord was exemplary.
25 May 1854