The word banian or banyan is to be found throughout the annals of the East India Company and describes the traders who acted as intermediaries between the European merchants and their Indian counterparts. In Gujarat, the Shroffs, Vohras and Parekhs were the chief banian families led by the early-seventeenth century figures such as Brij Vohra and Kalyandas Parekh. In eighteenth and nineteenth century Bengal the social borders were looser and people across caste and clan boundaries could function as banians. For example, Dwarkanath Tagore was a brahmin, Cantoo Babu (the banian of Warren Hastings) and Raja Naba Krishna Deb were kayastha and Motilal Seal was a subarnabanik (traditionally a lower caste). As Suvobrata Sarkar describes the system:

Closely associated with the agency houses were their brokers. Their function was to bring in and guarantee contracts for the supply of exportable produce from inland merchants. The brokers were called Banians in Calcutta.12 Sometimes they might be important merchants conducting business on their own. Raghuram Gosain, the Bengali banian of Palmer & Co., was a rich merchant in his own right. The early-nineteenth century banian Ramdulal Dey was a model, who acquired a fortune as a factor for the American traders. The banians were English-speaking Bengalis from Brāhmin, Kāyastha, and Banik castes, frequently financiers of their European principals. Motilal Seal, a Bengali ship-owner and merchant magnate, lent money while acting as broker to [British exchange houses]. Dwarkanath Tagore in his own unique way became a pioneer entrepreneur of the mid-nineteenth century. (Sarkar 2013) 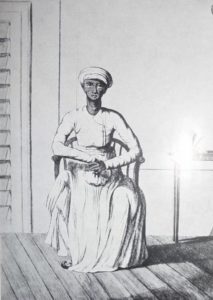 Hobson-Jobson identifies the difference between the Bengali context of banian and that of the rest of India in their definition:

A Hindu trader, and especially of the Province of Guzerat; many of which class have for ages been settled in Arabian ports and known by this name; but the term is often applied by early travellers in Western India to persons of the Hindu religion generally. b. In Calcutta also it is (or perhaps rather was) specifically applied to the native brokers attached to houses of business, or to persons in the employment of a private gentleman doing analogous duties (now usually called sircar). (Yule and Burnell)

Finally, William Bolts in his Consideration of Indian Affairs (1772-5) outlines in detail the duties and role of a banian as:  “He is interpreter, head book-keeper, head secretary, head broker, the supplier of cash and cash-keeper, and in general also secret-keeper.  He puts in the under-clerks […] and all the long tribe of under-servants, for whose honesty he is deemed answerable; and he conducts all the trade of his master, to whom, unless pretty well acquainted with the country languages, it is difficult for any of the natives to obtain access.” P.J. Marshall (1976) points to the real influence of the banian which was considerable: “as a man to be reckoned with […] Men like….Cantu Babu, banian to Warren Hastings, were among the richest and most influential members of the Indian community in Calcutta……They might appear to have become their masters’ servants, merely managing their trade for them; but the reality was often less that of master and servant than of trading partners.  The banian brought his skill and his capital to the partnership; the European contributed his privileges.” About Cantoo Babu, Margot Finn and Kate Smith note that “his situation as a banian meant that he could branch out from one highly profitable business, silk trading, into others” (Finn and Smith 2018). This was also true of Ramdulal Dey who set up trade relations with American merchants from Salem and Boston. Susan Bean notes that the ‘banian was essential; he spoke English; he knew the market; he knew where to procure commodities and sell imports; and sometimes, he supplied capital as well’ (Bean 70).

With the charter of 1813 abolishing of the monopoly of East India Company trade, many agency houses engaged in private trade were set up and there were over thirty of these by 1820. Some of the well-known ones were Palmer and Co. (with their offices in Alipore), Tulloh and Co. (based in the current Telegraph Office in Dalhousie Square), Fairlie Fergusson and Co., Jardine Henderson and Skinner and Gillanders & Arbuthnot. There were also a few Indo-British collaborations such as Carr, Tagore and Company; Oswald, Seal and Company, Kelsall and Ghose, and Rustomjee Cowasjee, Turner and Company.