Besides being a successful businessman, Baboo Mutty Lall Seal was  known particularly for his successful charitable activities in and around Calcutta. In 1841, he had established an extensive Almshouse and Thakurbari at Belghurriah [Belghoria] on the Barrackpore road [now B.T. Road]. During his lifetime, an average of 500 to 1000 people was fed daily.  In 1864, when Bengal suffered a disastrous famine, his son, Baboo Heera Loll Seal, ensured food and clothing to an average of three thousand people every day. 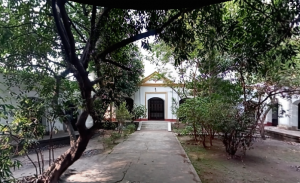 The Almshouse and Thakurbari is currently maintained and administered by the Mutty Lall Seal Trust and still provides free food for people from the poor and unprivileged sections of society, irrespective of class or religious faith. The aim is to adhere to Mutty Lall Seal’s liberality and reflect his sympathy for the destitute. 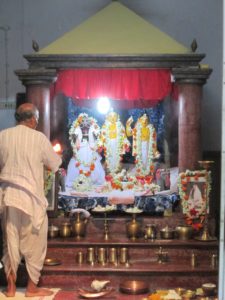 The Alms House is located in Rathtala, then a popular and well known hamlet, where people from different corners used to assemble to celebrate Rath Yatra (Laha 1940: 7). The temple is situated in the middle of a vast stretch of land with an extensive fish-pond. The pond is lined by fruit trees and the fruit is dedicated to the daily worship performed in the temple. The shrine of the temple houses the image of Jagannath and Gour Nitai (Laha 1940: 7-8) Apart from this, there are two different courtyards of the temple with separate and well-designed and clearly demarcated places for image worship and others.

The daily arrangement for feeding the poor and the destitute is quite impressive  in the sense that the alms-house would feed around a hundred people each day; also, ‘cooks, gardeners, priest and servants are entitled to enjoy advantage and privilege in exchange of service they render to the people in general’ (Laha 1940: 8). The fishpond adjacent to the thakurbari contains a variety of fish and fishing is not allowed from the times of Mutty Lall Seal. Sri Ramakrishna visited the thakurbari on 15th June, 1883 and wished to feed the fish as he considered them matsya avatar (one of the avatars of Vishnu). He also visited the shrine of Gouranga and Jagganath.

Sri Ramakrishna’s visit to the Thakurbari

Another Thakurbari was built by the Trustees, as per the wishes of Mutty Lall Seal, in Durgapur, Behala [see map], near Kolkata. The construction was completed in 1915 and it is also known for extending the Seal family charity to the needy.