Though Mutty Lall Seal was a devout follower of Vaishnavism, his beliefs was not confined to the customs and tradition of the then orthodox society. He encouraged widow remarriage much before Vidyasagar took up the cause of social reform and announced that anyone willing to marry a widow would be awarded a sum of twenty thousand (Laha 1940: 26). The prestigious Blackwood’s Magazine notes:

Great efforts have of late been made among the more enlightened Hindus to Baboo Motee Loll Seal a wealthy native of Calcutta offered 20,000 rupees a year or two since to the first Hindu who would marry a widow and we believe the prize has been since claimed and in the Asiatic Journal vol xxxviii p 370 we find the announcement of the establishment in 1842 of a Hindu widow re marrying club at Calcutta rid of this prejudice. (Blackwood’s Magazine 1843)

The celebrated professor of Hindoo College , David Lester Richardson (or D.L.R), also wrote about Seal’s ‘prize money’ for widow remarriage in his essay on Young Bengal. 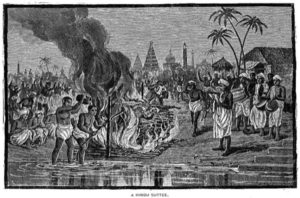 In 1829, William Bentinck’s administration endorsed the abolition of ‘sati’ under the influence and guidance of  the liberal Indian reformer, Raja Rammohan Roy. A parallel association was set up which comprised of orthodox opponents of Bentinck in the public domain. This came to be known as Dharma Shabha, or the society for the preservation of religion and virtue (Mitter 1869:25). Pandit Bhabanicharan Bandhopadhyay, the editor of Samachar Chandrika, was appointed as the Secretary of the Sabha. The main argument which emerged out of their discussion was that they would appeal to England against the abolition of sati. They also collected eleven thousand rupees for this purpose. However, their appeal was turned down. Although the Secretary had requested Motilal Seal to join the Sabha innumerable times, he refused due to the orthodox nature of the Sabha.

Mutty Lall Seal stated that the reason why he kept aloof was because it appeared to him that the Sabha was not a Dharma Sabha but adharma sabha, meant to preserve parochial and dogmatic religious practices (Laha 1940: 24). He recommended that the Sabha should be transformed into a charitable organization. Thus, a special session was held to accommodate the suggestion of Mutty Lall Seal. Sir Rajah Radhakanta Deb presided as the Secretary. Seal delivered a speech where he emphasized that charity has been the intrinsic aspect inculcated in all countries irrespective of their religion and class. Thus, his liberal view was instrumental in altering the perception and apprehensions about social reform among his fellow countrymen. The meeting came to an end with Mutty Lall Seal’s announcement of establishing a fund for the welfare of widows and orphans for which he contributed thirty thousand rupees.

He also supported women from other communities and when the Chowringhee Theatre got burned down, he donated five hundred rupees to the celebrated actress Esther Leach (Sengupta 1984: 116) and when she herself succumbed to burns after her dress caught fire in the new Sans Souci Theatre (where St. Xavier’s College is now housed), he provided for her children. In another example of charity, when the son of a courtesan called Heera Bulbul was not admitted to Hindoo College, Rajendra Dutta mooted the opening of the Hindu Metropolitan College in 1853 and was supported by Mutty Lall Seal (Laha 1940:16; Ajantrik 2017). According to historian Amales Tripathi, the Hindu Metropolitan College was formed by the amalgamation of Motilal Seal’s Free College and the David Hare Academy and celebrated professors such as David Lester Richardson and Captain Palmer taught here (Tripathi 1998: 138). Seal’s Free College again became an independent entity in 1858.

Mutty Lall Seal’s able son, Heeralal Seal  celebrated his brother’s marriage with pomp and grandeur on 24th November, 1865 (Laha 1940: 38). There was distribution of sweets along with fine clothes and other auspicious things to Brahmins and Kayasthas. Besides, they also sent precious gifts which included almonds, grapes, dates and aromatic essence to the Marwari, Armenian and Mughal aristocrats present in the city (Sinha 226). This reflects Seals’ cordial relations with other communities residing in Calcutta. During this celebration, many were released from their debts.  Heeralal and his mother Aunundomoyee Dassee both contributed hugely towards famine relief in 1866. Chunilal Seal donated a ward to the Medical College.